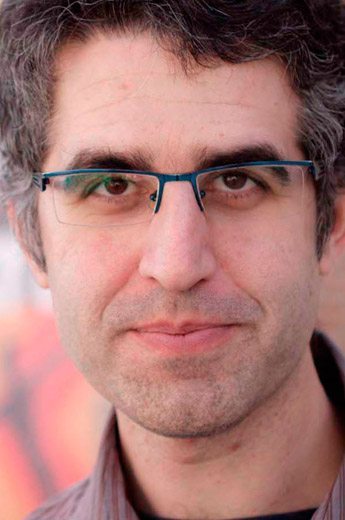 Juan Pablo Heras is a doctor and has a degree in Literature Theory and Compared Literature and Hispanic Philology. He started writing in the 90’s while he was studying at the University. At that time, he has written Guardo la llave (I Keep the key) and la Noche de Casandra (Cassandra’s Night)

Since then, he has developed a wide career as a playwright. He has a total amount of 12 plays (long and short forms), 5 of them awarded with relevant prizes in Spain and he stayed for a year in Rome thanks to the Spanish Academy of Rome. At that moment, he wrote one of his best plays: Todos los caminos (All roads).

His plays have been published in Spain, USA, Italy or Argentina and translated into different languages like English, Italian, Portuguese, Greek and even Dutch.

As a playwright, he writes in collaboration, makes adaptations like La Sonrisa Etrusca, Jose Luis Sampedro’s play starring the beloved Hector Alterio in 2011. He teaches writing and he is member of the Board of  Spanish Authors Association (AAT).

During the last years, Juan Pablo continued developing his career as a playwright and teaching literature in a High School in Madrid where he is also directing its theater company. He directed with them one of his awarded plays: De Fábula in the María Guerrero Theater (Spain Ministry of Culture) and won the second prize: Premios Buero de Teatro Joven, the most important youth prize in Spain.